A few weeks ago I blogged about how you can get custom TFS checkin policies to work when committing from the command line. In that post, I had a quick aside about how you can launch the checkin window (i.e. pending changes) with a quick keystroke using AutoHotkey. I realize that many people don’t use AutoHotkey (although you really should; it can save you a lot of time), so I thought I would show how you can accomplish this task without AutoHotkey. It’s quite simple really, and it allows you to launch the VS Checkin window from anywhere, even if you don’t have Visual Studio open.

Steps To Launch VS Checkin Window With A Shortcut Key

That’s it. Go ahead and try your shortcut key. I’ll wait. You should see something like this: 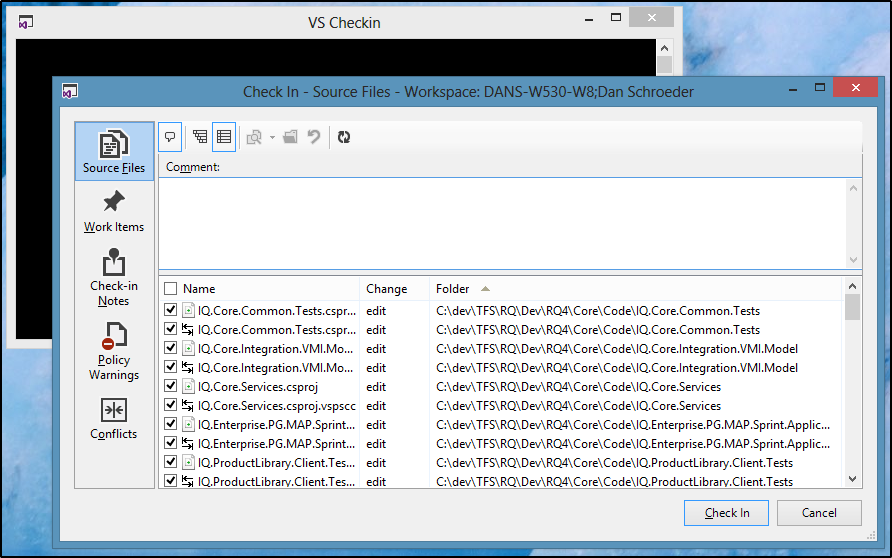 You probably noticed in the screenshot above that even though I’m using Visual Studio 2012, it still pops the old VS 2010 style of checkin window. I actually prefer this popped out window to the VS 2012 pending changes pane, and I know a lot of people agree.

Getting The Shortcut Off Your Desktop

If you are using TFS and want to shelve your changes instead of checking them in, you can access the old Shelve Pending Changes window in the same way. In step 4 above, instead of adding checkin as the TF.exe argument, add shelve. To launch it from the Visual Studio Command Prompt, type tf shelve instead of tf checkin.

As you may have guessed from the very start of the article, custom TFS checkin policies don’t run in this checkin window by default; they will throw errors. Fortunately for you I have already created a registry file that you can run after each checkin policy update that you do which will rectify this problem.

I hope this helps you be more productive. Happy coding!