I frequently check code into TFS from the command line, instead of from Visual Studio (VS), for a number of reasons: 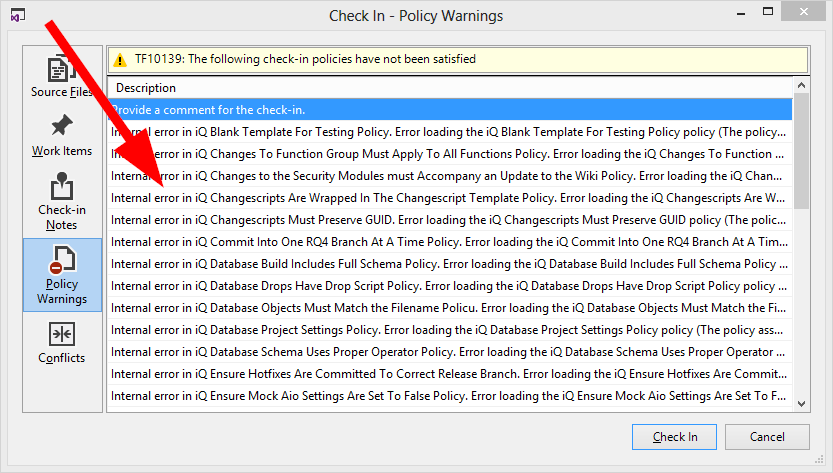 P. Kelly mentions this problem on his blog post, and has some other great information around custom checkin policies in TFS.

The old TFS 2010 Power Tools had a feature for automatically distributing the checkin policies to your team, but unfortunately this feature was removed from the TFS 2012 Power Tools. Instead, the Microsoft recommended way to distribute your custom checkin policies is now through a VSIX package, which is nice because it can use the Extension And Updates functionality built into VS and automatically notify users of updates (without requiring users to install the TFS Power Tools). The problem is that VSIX packages are sandboxed and are not able to update the necessary registry key to make custom checkin policies work from the command line. I originally posted this question on the MSDN forums, then I logged a bug about this on the Connect site, but MS closed it as “By Design” :-(. Maybe if it gets enough up-votes though they will re-open it (so please go up-vote it).

The good news though is that there is a work around. You simply need to copy your custom checkin policy entry from the key:

Not Perfect, but Better

The bad news is that every developer (who uses the command line checkin window) will need to copy this registry value on their local machine. Furthermore, they will need to do it every time they update their checkin policies to a new version.

While this sucks, I’ve made it a bit better by creating a little powershell script to automate this task for you; here it is:

Note that you will need to update the script to change YourCustomCheckinPolicyEntryNameGoesHere to your specific entry’s name. Also, the “[Environment]::Is64BitOperatingSystem” check requires PowerShell V3; if you have lower than PS V3 there are other ways to check if it is a 64-bit machine or not.

Note that this batch script assumes you named the PowerShell script “UpdateCheckinPolicyInRegistry.ps1”, so if you use a different file name be sure to update it here too.

Your developers will still need to run this script every time after they update their checkin policies, but it’s easier and less error prone than manually editing the registry. If they want to take it a step further they could even setup a Scheduled Task to run the script once a day or something, or even implement it as a Group Policy so it automatically happens for everyone, depending on how often your company updates their checkin policies and how many developers you have.

Ideally I would like to simply be able to run this script during/after the VSIX installer. I have posted a question on Stack Overflow to see if this is possible, but from everything I’ve read so far it doesn’t look like it; maybe in the next generation of VSIX though. If you have any other ideas on how to automate this, I would love to hear them.

Ah, this explains why two registry values are required for each Visual Studio version. I took a non-VISX approach, building a simple Wix installation project as part of the custom check-in policy solution, and multiple projects to support different VS versions, more information on my blog http://ianhardingtech.wordpress.com/2013/09/15/tfs-custom-check-in-policy-for-multiple-visual-studio-versions/

Daniel Schroeder's Programming Blog » Template Solution For Deploying TFS Checkin Policies To Multiple Versions Of Visual Studio And Having Them Automatically Work From “TF.exe Checkin” Too

[…] needs to be changed there, but I will explain how it works here.  A while back I blogged about how to get your Team Foundation Server (TFS) checkin polices to still work when checking code in fro… via the “tf checkin” command; by default when installing your checkin policies via a VSIX […]