If you follow my blog then you already know I’m a huge fan of AutoHotkey (AHK), and that I created the AHK Command Picker to allow me to have a limitless number of AHK macros quickly and easily accessible from my keyboard, without having a bunch of hotkeys (i.e. keyboard shortcuts) to remember. The team over at CEDEQ saw my blog posts and were kind enough to send me an Enterpad AHK Keyboard for free :-)

What is the Enterpad AHK Keyboard?

The Enterpad AHK keyboard is a physical device with 120 different touch spots on it, each of which can be used to trigger a different AHK macro/script. Here’s a picture of it: 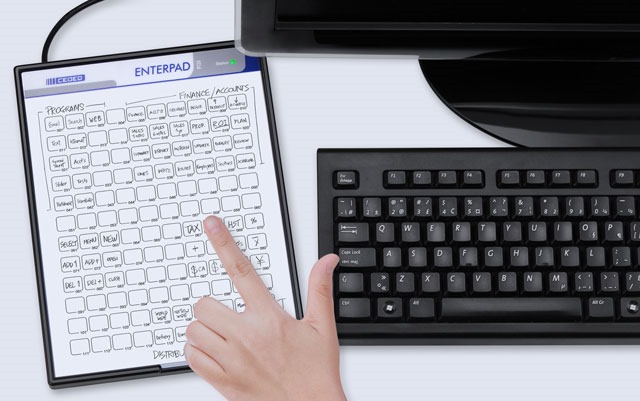 While macro keyboards/controllers are nothing new, there are a number of things that separate the Enterpad AHK keyboard from your typical macro keyboard:

What do you mean when you say use it to launch a macro or script?

A macro or script is just a series of operations; basically they can be used to do ANYTHING that you can manually do on your computer. So some examples of things you can do are:

For example, you could have a script that opens Notepad, types “This text was written by an AHK script.”, saves the file to the desktop, and then closes Notepad. Macros are useful for automating things that you do repeatedly, such as visiting specific websites, entering usernames and passwords, typing out canned responses to emails, and much more.

The AHK community is very large and very active. You can find a script to do almost anything you want, and when you can’t (or if you need to customize an existing script) you are very likely to get answers to any questions that you post online. The Enterpad team also has a bunch of general purpose scripts/examples available for you to use, such having 10 custom clipboards, where button 1 copies to a custom clipboard, and button 11 pastes from it, button 2 copies to a different custom clipboard, and button 12 pastes from it, etc..

Why would I want the Enterpad AHK Keyboard?

Some reasons you might want an Enterpad AHK Keyboard

Some reasons you may want a different macro keyboard

Even if you don’t want to use the Enterpad AHK keyboard yourself, you may want to get it for a friend or relative; especially if you have a very non-technical one. For example, you could hook it up to your grandma’s computer and write a AHK script that calls your computer via Skype, and then label a button (or 10 buttons to make it nice and big) on the Enterpad AHK keyboard so it is clear which button to press in order to call you.

One market that I think the Enterpad AHK keyboard could really be useful for is the corporate world, where you have many people doing the same job, and who all follow a set of instructions to do some processing. For example, at a call center where you have tens or hundreds of employees using the same software and performing the same job. One of their duties might be for placing new orders of a product for a caller, and this may involve clicking through 10 different menus or screens in order to get to the correct place to enter the customers information. This whole process could be automated to a single button press on the Enterpad AHK keyboard. You are probably thinking that the software should be redesigned to make the process of submitting orders less cumbersome, and you are right, but most companies don’t develop the software that they use, so they are at the mercy of the 3rd party software provider. In these cases, AHK can be a real time-saver, by a company deploying an Enterpad AHK keyboard to all of its staff with a custom labeled overlay, and the IT department writing the AHK scripts that the employees use with their Enterpad AHK keyboards, all of the staff can benefit from it without needing to know anything about AHK.

So should you go buy an Enterpad AHK Keyboard? That is really up to you. I have one, but find that I don’t use it very often because I tend to prefer to use the AHK Command Picker software so that my fingers never leave my keyboar0; Some of my co-workers have tried it out though and really love it, so if you prefer to have a separate physical device for launching your macros then the Enterpad AHK Keyboard might be perfect for you.