Most people will likely find the “Run script path with spaces from File Explorer” (to be able to double click a PS script whose path contains spaces to run it) section below the most helpful. Most of the other content in this post can be found elsewhere, but I provide it for context and completeness.

Make running (instead of editing) the default PowerShell script action

The default Windows action when you double click on a PowerShell script is to open it in an editor, rather than to actually run the script. If this bugs you, it’s easy enough to fix. Just right-click on the script, go to “Open with” –> “Choose default program…”, and then select Windows PowerShell, making sure the “Use this app for all .ps1 files” option is checked (this might be called “Always use the selected program to open this kind of file” or something else depending on which version of Windows you are using). 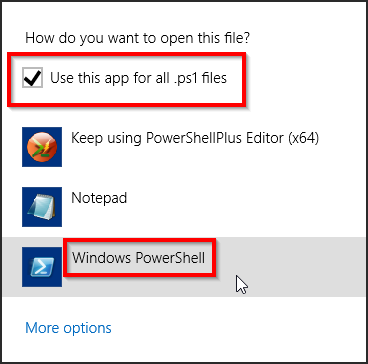 If you don’t mind opening in an editor as the default action, then to run the script you can just right-click on the script and choose “Open with” –> “Windows PowerShell”. This is probably how 90% of people run their PowerShell scripts; power uses might run their scripts directly from the PowerShell command prompt.

So the problem that the 90% of people are likely to encounter is that as soon as the script path has a space in it (either in the filename itself or in the directory path the file resides in), they will see the powershell console flash some red text at them for about 1/10th of a second before it closes, and they will be wondering why the script did not run; or worse, they won’t know that it didn’t run (see the “Keep PowerShell Console Open” section below). If they are lucky enough to press Print Screen at the right moment, or decide to open up a PowerShell console and run from there, they might see an error message similar to this:

The term ‘C:\My’ is not recognized as the name of a cmdlet, function, script file, or operable program. Check the spelling of the name, or if a path was included, verify that the path is correct and try again.

So the path to the script I was trying to run is “C:\My Folder\My PowerShell Script.ps1”, but from the error you can see that it cut the path off at the first space.

So the typical work around for this is to open a PowerShell console and run the script by enclosing the path in double quotes.

Windows 8 Pro Tip: You can open the PowerShell console at your current directory in File Explorer by choosing File –> Open Windows PowerShell. 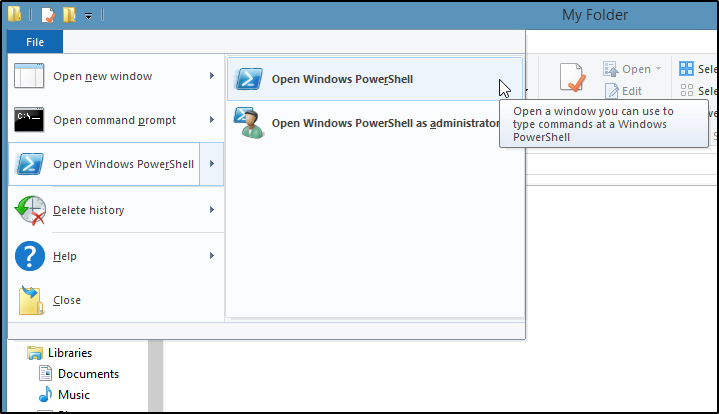 If you simply try to run the script by enclosing the path to the script in double quotes you will just see the path spit back at you in the console, instead of actually running the script.

The trick is that you have to put “& “ before the script path to actually run the script. Also, if you are trying to run a script from the current directory without using the full path, you will need to put “." before the relative script filename.

So when we are in the PowerShell console we can manually type the path enclosed in double quotes, but what do we do when simply trying to run the file from File Explorer (i.e. Windows Explorer in Windows 7 and previous) by double clicking it?

The answer: Edit the registry to pass the file path to powershell.exe with the path enclosed in quotes.

The problem is that the “HKEY_CLASSES_ROOT\Applications\powershell.exe\shell\open\command” registry key value looks like this:

IMHO this seems like a bug with the PowerShell installer (and Windows since PowerShell is built into Windows 7 and up), so please go up-vote the bug I submitted to get this fixed.

So now you can run your PowerShell scripts from File Explorer regardless of whether their path contains spaces or not :-). For those interested, this is the post that got me thinking about using the registry to fix this problem.

Update - This Bonus section now has its own updated dedicated post here that you should use instead.

So to keep the PowerShell console window open after the script completes, we just need to change our new key value to use the –NoExit switch:

And here is the .reg script with the –NoExit switch included:

I hope you find this information as useful as I did. Happy coding!

Thanks for the very useful article. I did run into a little problem (not your fault). On my system, the registry entry moved to “Microsoft.PowerShellScript.1” but wherever it is, I think you can always find it as follows: Insert the ‘(default)’ value from registry entry [HKEY_CLASSES_ROOT.ps1] into your registry path. In my case this generates [HKEY_CLASSES_ROOT\Microsoft.PowerShellScript.1\Shell\Open\Command] and note that \Applications is not there.

[…] originally included this as a small bonus section at the end of my other post about fixing the issue of not being able to run a PowerShell script whose path contain…, but thought this deserved its own dedicated […]

Great Stuff, Thanks a lot !!! I have been struggling with this

Great article. Please add a note regarding 32-bit PowerShell, which runs from: C:\Windows\SysWOW64\WindowsPowerShell\v1.0
It could be useful for those who specifically needs the 32-bit version, e.g. when running VMware vSphere PowerCLI scripts via PowerShell.

By the way, the link to the bug you submitted isn’t valid anymore. If your bug is still submitted, please post the newer link so we’ll be able to upvote it.

Good information. However it needs a little bit more info.

Here is my problem.

I have a Powerscript I run from a .bat file. I use the following commend..

When %~dp0 resolves to a path that has NO spaces in it, the script runs fine. IE…

However, when it resolves to a path with a space in it I get an error message and in effect the problem with the space in the path is the cause.

Using the & before or embeded in the path string does not solve the problem.

What is the correct way to write my command line so that it will work without modifying the registry etc?

All these entrys in my Win7SP1 registry were successful: "C:\Windows\System32\WindowsPowerShell\v1.0\powershell.exe" "& \"%1\""

So I'd prefer the shortest one. As PowerShell seems to allow ' or " as string delimiters, which is to prefer?

Thank you, this was driving me crazy. A simple & and my script now runs from command line. ISE worked, explorer worked, even Visual Studio worked. one little &.