Update: Before you go running your script as an admin, see if this less obtrusive fix will solve your problems.

If you’ve installed Windows 8 and are trying to use AutoHotkey (AHK) to interact with some of the Windows 8 Windows (such as the Control Panel for example), or with apps that need to be Ran As Administrator, then you’ve likely become very frustrated as I did to discover that AHK can not send any commands (keyboard or mouse input) to these windows. This was a huge concern as I often need to run Visual Studio as an administrator and wanted my hotkeys and hotstrings to work in Visual Studio. After a day of fighting I finally realized the answer (and it’s pretty obvious once you think about it). If you want AHK to be able to interact with Windows 8 Windows or apps running as administrator, then you also need to have your AHK script Run As Administrator.

If you are like me then you probably have your AHK scripts set to run automatically at login, which means you don’t have the opportunity to right-click on the script and manually tell it to Run As Administrator. Luckily the work around is simple.

First, if you want to have your AHK script (or any program for that matter) run when you log in, create a shortcut to the application and place the shortcut in:

Note that you will need to replace “[User Name]” with your username, and that “AppData” is a hidden folder so you’ll need to turn on viewing hidden folders to see it (you can also type “shell:startup” in the Windows Explorer path to jump directly to this folder). So by placing that shortcut there Windows will automatically run your script when you log on. Now, to get it to run as an administrator by default, right-click on the shortcut and go to Properties. Under the Shortcut tab, click on the “Advanced…” button and check off “Run as administrator”. That’s it. Now when you log onto Windows your script will automatically start up, running as an administrator; allowing it to interact with any application and window like you had expected it to in the first place. 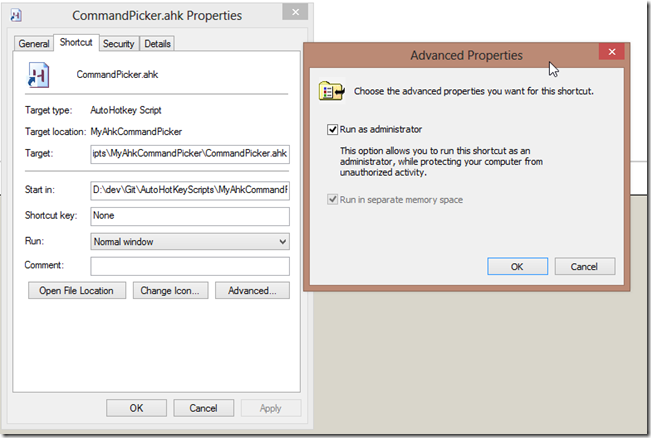 […] while back I posted about AutoHotKey not being able to interact with Windows 8 windows and other applications that were Ran As….  My solution was to run your AutoHotkey (AHK) script as admin as well, and I also showed how […]