You may have noticed my blog has a very different look now! It used to look like this. 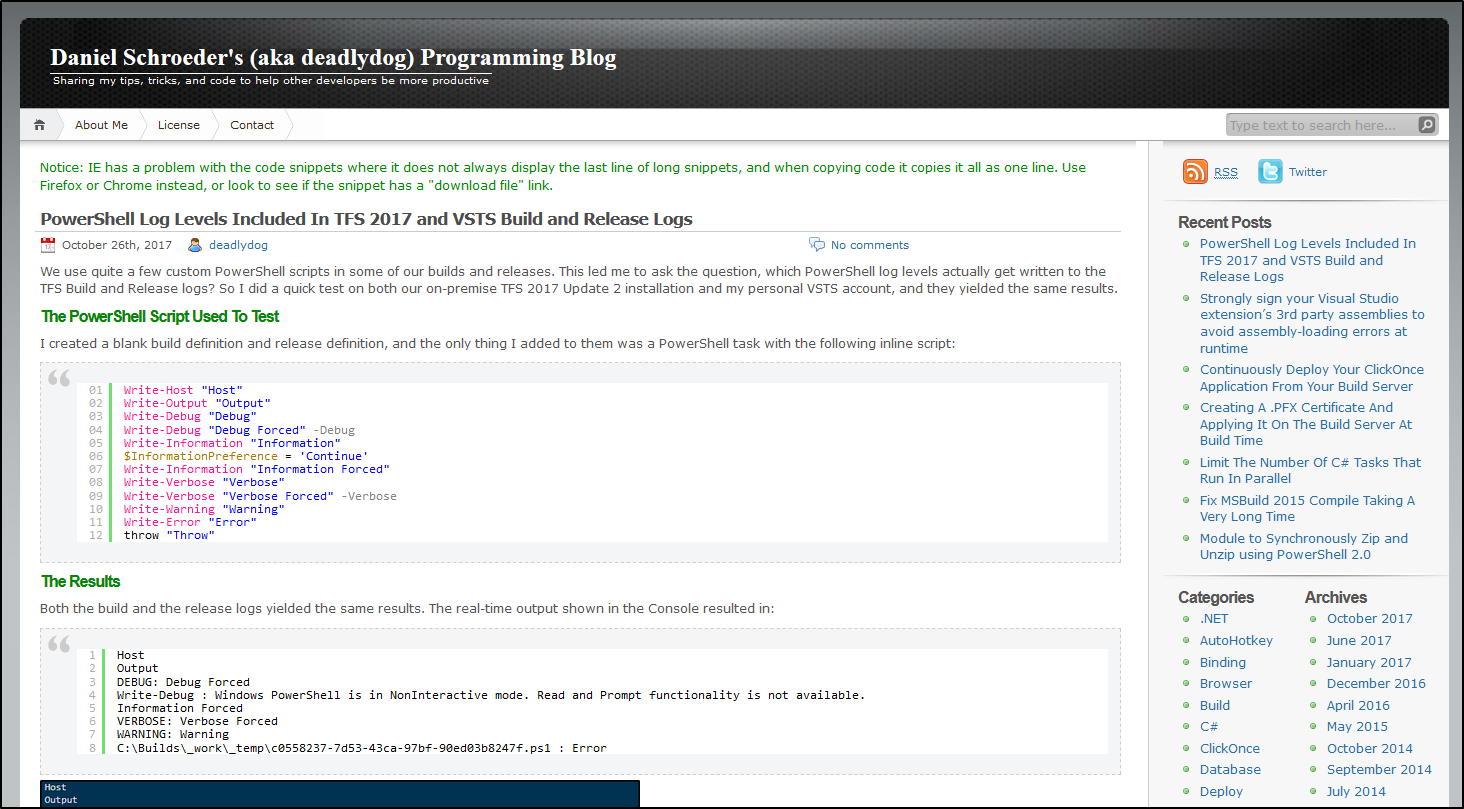 I decided to migrate my blog from WordPress to Jekyll, and this blog post highlights my reasons why and some of my experiences when doing so.

You’ve probably heard of WordPress, but maybe not Jekyll. They are both platforms for hosting blog content. The big difference, in my eyes, is that WordPress stores all of it’s data in a MySQL database, while Jekyll’s data is all stored in text files. This means your entire blog contents can be stored in source control, such as Git.

Jekyll is used to compile the file contents and output all of the files for your static website, typically by running a command like bundle exec jekyll serve. Jekyll typically supports websites with static content, making it ideal for blogs. Jekyll leverages the Liquid programming language for flow control (if statements, loops, etc.) and FrontMatter for variables. It also allows you to write your website content in Markdown, as well as HTML.

Visit the official Jekyll site to learn more and see how to get started with it.

Why I migrated from WordPress to Jekyll

You may have noticed that I haven’t blogged in quite a while; almost 2 years! While I was busy with work and family, another contributor was simply that the technology didn’t make it easy to post new content.

Reasons why I wanted to convert my blog away from WordPress:

Reasons why I decided to use Jekyll:

Why didn’t I go to some other free hosted service

There are a ton of free blog hosting options out there, even programming focused ones like dev.to, so why did I decide to go this route?

I originally started my blog with GeeksWithBlogs.net. A couple years after starting my blog, they announced that they were shutting down (although they still seem to be around today, *head-scratch*). With the thought of losing all of the hard work I had put into my blog content (even if it wasn’t great), it was then that I decided I was going to move into a self-hosted blog alternative. One where even if my provider disappeared one day, I wouldn’t lose all of my hard work.

Luckily there was an existing process for exporting from GeeksWithBlogs to WordPress, and that’s what I went with. With WordPress I would be able to have database backups and manually put my files into source control. Back then (circa 2012), this was very appealing. I wouldn’t be relying on a 3rd party service anymore, and would truly own (and host) my content. I decided to self-host my WordPress site so that I wouldn’t be relying on some 3rd party provider that might go under again, and so that I had more options between themes and plugins to use, while not subjecting my readers invasive advertisements.

Fast-forward 7 years; being able to natively store my blog in source control with free hosting is even more appealing.

How I migrated from WordPress to Jekyll

If you’re starting a new blog or website from scratch, using Jekyll is pretty straightforward and you can get up and running in a few minutes. I had a lot of existing content in WordPress that I wanted to migrate though, so I used the WordPress to Jekyll Exporter plugin, which worked great. I did have a problem with it at first though, in that it kept generating a zero-byte zip file. Fortunately I was able to just roll it back from v2.3.0 to 2.2.3 and that version worked properly.

Once I had the data out WordPress and in text files in the Jekyll file structure, there were a few changes I needed to make before it would show correctly:

Finding a Jekyll theme to use

There are a lot of great Jekyll themes to choose from. Some things to be aware of when choosing a theme though is that some actually provide different features, such as:

If the theme you choose doesn’t support a specific feature, you can always add it in yourself, but it does require some development effort and know-how. It’s great if you can find one that not only looks great, but that also natively supports everything you want.

This was probably one of the most confusing parts of the migration for me. There are 3 different ways you can use a theme in Jekyll, and not all themes support all 3 ways. The 3 options you have are:

I ended up using the minimal mistakes theme and the remote theme repository strategy.

I first started out using the Ruby Gems approach, but ran into issues where the site wouldn’t display my posts; it seemed to work with some themes (ones I didn’t want to actually use), but not others. I didn’t understand why at the time, but it was due to my lack of understanding of how Liquid and FrontMatter worked with the themes. Not all themes looks for the same variables; some expect your posts to have layout: post defined on them, others want layout: posts, or layout: single, or something else. If the posts don’t have the theme’s expected FrontMatter variables defined on them, they might not be recognized as themes, causing them to not be displayed, or to be displayed, but not look how you expect them to.

In addition to specific FrontMatter variables, different themes often expect to find different variables defined in your _config.yml file as well. While there are some standard variables that most themes expect to find, such as name and description, theme’s may expect other variables as well depending on what features they offer. For example, the minimal mistakes theme expected to find a words_per_minute variable so that it can display the estimated reading time of a post.

With Jekyll, Liquid accesses variables defined in the _config.yml by using the site keyword. For example, in my theme’s code it accesses the words_per_minute variable by using site.words_per_minute. Variables defined in a posts FrontMatter are accessed using the post keyword, such as post.date, where date would be a FrontMatter variable defined at the top of my posts.

So if your site is not displaying how you expect it to, read the theme’s documentation (if it has any), or dig right into its code to see what variables it expects to be defined at the site and post level.

Lastly, I’ve found that sometimes the best or quickest way to troubleshoot issues is to find somebody elses website that’s using the same theme or integrations as you and take a look at their code. Feel free to check out the code used to host this blog.

Getting your site up and running on GitHub Pages is actually super easy. GitHub has some help docs that walk you through it. The main points are:

Using Staticman to get comments in Jekyll

With Jekyll producing a static website and not having a database, it doesn’t natively lend itself to comment submissions. Luckily, there are several options for adding comments to your Jekyll site, with one of the most popular being Disqus. I decided to go with Staticman for my blog because, again, I didn’t want to be reliant on a 3rd party; I want to own all of the content and not worry about a 3rd party going out of business, changing their pricing model, or figuring out how to export my comments out of their system at a later point in time.

With Staticman, you add a form to your website (if your theme doesn’t provide a built-in one). When a comment is submitted, it sends the information to the Staticman API, and then Staticman will open up a pull request against your GitHub (or GitLab) repository with the information. Once the pull request is completed, the comment will now be inside of your Git repository, causing GitHub Pages to rebuild your Jekyll site and display the new comment.

The idea of how Staticman works is simple enough, and actually pretty clever. Unfortunately when I went to integrate Staticman into my Jekyll site (summer 2019), there were issues with Staticman. The main issue was that the official documentation says to use a free publicly hosted instance of the Staticman API, and gives the URL for it. The problem is that it’s using a free hosting plan and is limited to a certain number of requests per day. As more and more people adopted it, it began reaching it’s quota very often, resulting in frequent 409 Too many requests errors when people tried to submit comments.

This led me down the path of hosting my own private instance of Staticman. Luckily, a few other people had already taken this route as well and blogged some nice tutorials for various hosting providers. The unfortunate bit was the official Staticman docs had not been updated to include any of this information, so finding it involved hunting through numerous GitHub issues on the Staticman repository. Also, many of the code changes required for these hosting options had not been merged into the Staticman dev or master branches yet, so it meant using an “unofficial” Staticman branch.

For myself, I ended up using Heroku to host my Staticman instance. It’s completely free, and since I’m the only one hitting the API, I shouldn’t run over my API request limit. This GitHub issue provides more information around exactly what I did and the issues I encountered and their resolutions. My main issues had to do around using ReCaptcha on comment submissions, but I got it all figured out in the end.

While I can technically use any text editor to create blog posts, my favourite editor is VS Code, for a number of reasons:

Hopefully this has given you some insight or tips into what you can do with your own blog. I chose Jekyll because it allows me to host the website wherever I like, and I completely own my content and don’t have to worry about my hosting provider going out of business. I also chose it because GitHub Pages natively supports it, and can host my blog completely for free.

The hardest part was getting my existing content changed into a format that my chosen theme expected. I think starting fresh from scratch would be much easier, regardless of what theme you choose to go with. I’m not certain that I would recommend Jekyll for somebody non-technical (like my mom), but for software developers who like to write in Markdown it’s definitely a top contender.

Great explanation and info. Thank you.

Thanks, this helped me a lot (this comment also serves to see if your comments are still working).

Having an own Min-Mis based jekyll blog and wanting to get staticman to work I appreciate finding some info with a working form here too, thanks!